Difference between revisions of "Skeleton Tracking"

In Motive, skeleton assets are used for tracking human motions. Skeleton assets auto-label specific sets of markers attached to human subjects, or actors, and create skeletal models. Unlike rigid body assets, skeleton assets require additional calculations to correctly recognize and label reconstructed markers on multiple semi-rigid body segments. In order to simplify skeleton definition and calculation, Motive uses pre-defined skeleton marker sets (a collection of marker labels and their specific positions on a subject), and retroreflective markers must be placed on pre-designated locations of the body. This page details instructions on how to create skeleton assets in Motive and associated features.

When it comes to tracking human movements, a proper marker placement becomes especially important. Motive utilizes pre-programmed skeleton markersets, and each marker is used to indicate anatomical landmarks when modeling the skeleton. Thus, all of the markers must be placed at their appropriate locations. If any of markers are misplaced, the skeleton will not be created. Even if the skeleton is created, bad marker placements can lead to labeling problems, and the created skeleton may appear to be crooked. Accordingly, taking extra care to arrange markers correctly can save time in post-processing of the data.

Open Skeleton pane and select the markerset you desire to use from the dropdown menu. A total number of required markers for each skeleton is indicated in the parenthesis after the name of each markerset, and corresponding marker locations are displayed over an avatar shows up in the Skeleton pane. Instruct the subject to strike a calibration pose (T-pose or A-pose) and carefully follow the figure and place retroreflective markers at corresponding locations of the actor or the subject. Attaching markers onto a person’s skin can be difficult because hairs, oils, and moistures from sweat can affect the adhesiveness. Plus, dynamic human motions tend to move the markers during capture, so use appropriate skin adhesives for securing marker bases onto the skin. Alternatively, mocap suits allow Velcro marker bases to be used.

All markers need to be placed on the respective anatomical location of the skeleton. In other words, joint markers need to be carefully placed along the corresponding joint axis. For example, ask the subject to flex the knee about 90 degrees, and palpate the knee joint to locate the axis. Place the markers on the axis so that they do not move with the knee movement.

For best results, associated segment markers (left and right) must be placed asymmetrically within a skeleton. By doing so, left and right side will be more thoroughly distinguished throughout the capture. Segment markers are markers that are placed within a body segment, but not around a joint. For example, placing the right thigh marker slightly higher than the left thigh marker helps Motive to differentiate them. This asymmetry is also reflected in the avatars shown in the Skeleton pane.

Markers for the Biomechanics markersets must be placed precisely with extra attention because these placements directly relate to coordinate system definition of each respective segment, and thus influencing the resulting biomechanical analysis. Mocap suits are not suitable for biomechanic application because an additional uncertainty is introduced from the fabric layer between the marker and the subject. The markers need to be placed on the skin for direct representation of the subject’s movement. While all the marker placement must follow the details from the avatar in the Skeleton pane, there are more considerations that need to be made when attaching markers. ↑

Creating a skeleton from Project Pane. Properties for the selected asset is described at the bottom. 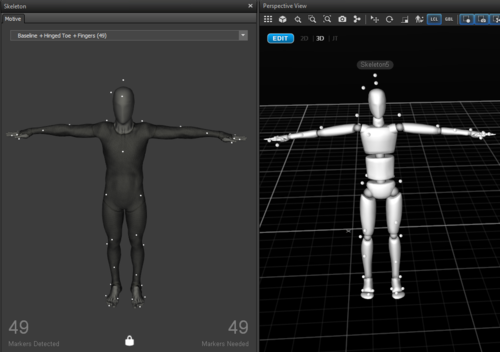 Creating a skeleton asset in Motive.

The T-pose is commonly used as the reference pose in 3D animation to bind two characters or assets together. Motive uses this pose when creating skeletons. The T-pose requires a proper standing posture with back straight and head looking directly forward. Then, both arms are stretched to sides, forming a “T” shape. Both arms and legs must be straight, and both feet need to be aligned together. For finger tracking marker sets, all fingers must be fully extended and aligned together creating a flat surface. For best results, thumbs need to be tucked in slightly to improve the alignment of the fingers. The following diagrams, taken from the Skeleton Pane, show examples of a proper T-pose. 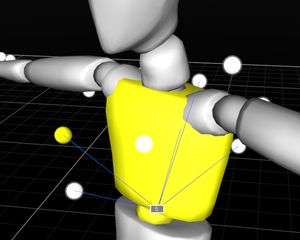 Skeleton templates can be slightly modified by adding new markers to the set. Follow the below steps for adding/removing markers. After the skeleton marker set has been modified, auto-label the Take again to re-label the skeleton markers. Note that modifying (especially removing) skeleton markers is not recommended since changes to default templates can corrupt the tracking data when it is done inappropriately. Removing too many markers may result in poor skeleton reconstructions while adding too many markers may lead to labeling swaps. If any modification is necessary, try to keep the changes minimal. Otherwise, contact us for possible solutions for non-standard skeleton marker sets.

For Motive 1.10 and above, skeleton marker colors and marker sticks can be viewed in the perspective view pane. They provide color schemes for clearer identification of skeleton segments and individual marker labels from the perspective view. To view them, enable the Marker Sticks and Marker Colors under the Application Settings or under the visual aids

in the perspective view pane. Default color scheme will be assigned when creating a marker set. To modify them, export and edit the skeleton template XML file, where the custom marker labels can also be assigned. 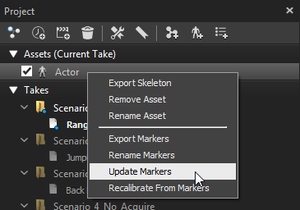 The marker colors and sticks are featured only in Motive 1.10 and above, and skeletons created using Motive versions before 1.10 will not include the colors and sticks. For the Takes recorded before 1.10, the skeleton assets will need to be updated from the Project pane by right-clicking onto an asset and selecting Update Markers. The Update Markers feature will apply the default XML template to skeleton skeleton assets. 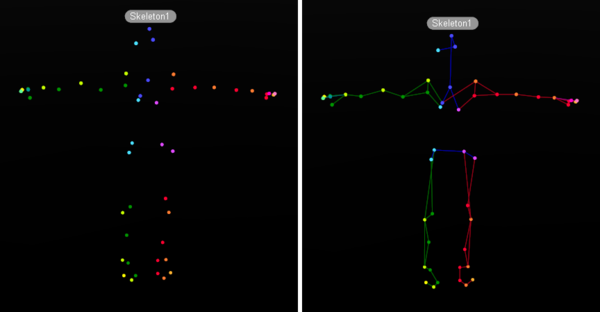 A rough representation of joint angles can be obtained either when exporting a tracking data into CSV files or when streaming the skeleton rigid body data. When exporting into CSV, set Coordinate Space setting to Local to obtain bone segment position and orientation values in respect to its parental segment, roughly representing the joint angles by comparing two hierarchial coordinate systems. This can also be done in data streaming by setting the Local Rigid Bodies to true in the data streaming pane.