The OptiTrack Unreal Engine 4 Plugin allows real-time streaming of live rigid body tracking data from Motive into Unreal Engine 4 (abbreviated as UE4). The plugin also features HMD tracking integration for virtual reality applications. Once the plugins are added to the Unreal Engine directory, OptiTrack – NatNet Streaming Client and OptiTrack – Oculus Rift plugins will be available within the UE4 project. This article focuses on the streaming workflow as well as setting up the HMD in UE4 using the plugin. For general instructions on setting up the system, please refer to the Getting Started guide.

The NatNet Streaming Client plugin will allow you to stream rigid body tracking data from Motive onto Unreal Engine, and the Oculus Rift plugin will allow you to implement HMD tracking onto your scene. Once the plugins are enabled, OptiTrack Client Origin object can be called, and it connects the project to the server application (i.e. Motive) via NatNet protocol. Position and orientation of the Client Origin object reconciles the global origin in Motive, and all streamed tracking data will be referenced against to it. This origin can be placed anywhere in the scene and scaled to different sizes. Once the project is connected to the server application, imported tracking data can be used to instantiate the HMD and animate the objects in virtual reality applications.

OptiTrack motion capture systems provide motion tracking with outstanding accuracy, and all of which can be accomplished with extremely low latency. Utilizing its tracking capability, an OptiTrack system can be used to provide fully immersive virtual reality experience by integrating head-mounted display (HMD) device. From this combined setup, even tiny movements can be precisely captured and reflected in the virtual scene.

This plugin is supported for the following versions of Unreal Engine, and it also requires the corresponding version of Oculus runtime as indicated in the table. 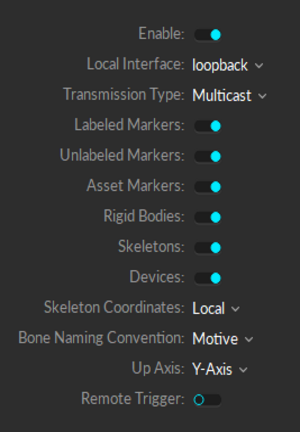 To stream the rigid body data, follow the general data streaming workflow provided from the Data Streaming page. Make sure appropriate network interface is defined and the Stream Rigid Bodies is enabled under the streaming settings.

This section includes instructions on installing and configuring the Unreal Engine plugin to receive tracking data from Motive. 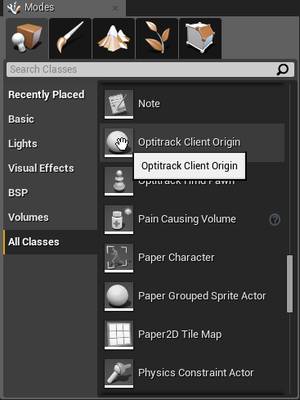 Once the plugin is properly added, the Client Origin Object can be found under Modes panel in UE4.

The OptiTrack Client Origin enables the Unreal Engine (client) to communicate with the NatNet server where Motive’s rigid body and HMD tracking data is obtained. In the client object, both the communication address and the rigid body ID for the HMD are configured. Add this object simply dragging and dropping the OptiTrack Client Origin from the Modes panel into the scene.

Once the OptiTrack Client Origin is placed, position and orientation of this object will reconcile the global origin of Motive in Unreal Engine. In other words, the tracking data will be represented according to where this Client Origin object is placed and how it is oriented.

Actor objects in Unreal Engine can be animated using rigid body tracking data from Motive. Once the OptiTrack - NatNet Streaming Client plugin is enabled, OptiTrack Rigid Body component will be available to use, and by attaching this component to an actor, you can animate its child components according to the movement of the associated rigid body. Each parent component is given a Trackable ID value, and rigid bodies with the matching Streaming ID will be used to translate and rotate the target actor in Unreal Engine. Please note that this component must be attached to the parent node to animate its child actors.

Starting from the plugin version 1.9.2, the skeleton component has been added to allow streaming of the skeleton via bone mapping. This means that the bone segments in Motive can be mapped directly to the character model (bone mapping), instead of being translated into something that is usable by a more abstract biped model (retargeting). The instructions for setting up the skeleton streaming component is documented in the following page:

Integrating skeleton tracking in Unreal Engine requires a 3D retargeting process. This can be accomplished through a third party software that retargets the 3D data to produce realistic motion in a scene. For more information, contact us.

First of all, make sure the OptiTrack – OculusVR is enabled in your project in the plugins panel in order to integrate the HMD. Once the Client Origin object is called into the project, input the streaming ID for the HMD rigid body to the HMD Rigid Body ID section under the OptiTrack Client Origin. Then within the project World Settings, set the Default Pawn Class to be the OptiTrackHMDPawn class. Once this is set up, follow the HMD setup steps in the next section to prepare your HMD object in Motive. 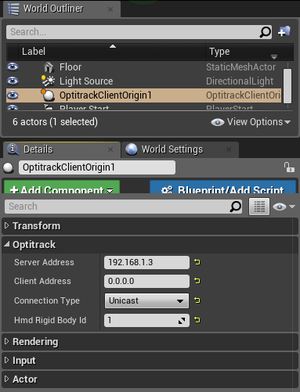 Gear VR devices can also be integrated and the tracking information can be streamed via wifi connections using a router with sufficient bandwidth. The required bandwidth will vary depending on many factors (e.g. router type, the number of tracked object, etc.). The following settings must be configured in addition to the above HMD settings for developing Gear VR experiences using the plugin. For more information on developing Gear VR applications in Unreal Engine, refer to UE 4 documentations.

1. [Android] Connect the smartphone to the internet router which the host PC (server) is connected to.
2. [UE4] Configure the Client object.

3. [UE4] Connect a smartphone into the PC, build and run the project.
4. Make sure Motive is streaming, and the Gear VR HMD tracking data will be streamed into the UE4 application.