Difference between revisions of "Markers"

OptiTrack motion capture systems can use both passive and active markers as indicators for 3D position and orientation. An appropriate marker setup is essential for both tracking quality and reliability of captured data. All markers must be properly placed, and must remain securely attached to surfaces throughout capture. If any markers are taken off or moved, they will become unlabeled from the marker set, and the corresponding data will be either lost or approximated. In addition to marker placements, marker counts and specifications (sizes, circularity, and reflectivity) also influence the tracking quality. Passive (retroreflective) markers need to have well maintained retroreflective surfaces in order to fully reflect the IR light back to the camera. Active (LED) markers must be properly configured and synchronized with the system.

OptiTrack cameras track any surfaces covered with retroreflective material, which is designed to reflect incoming light back to its source. IR light emitted from the camera is reflected by passive markers and detected by the camera’s sensor. Then, the captured reflections are used to calculate 2D marker position, which is used by Motive to compute 3D position through reconstruction. Depending on which markers are used (size, shape, etc.) you may want to adjust the Reconstruction Properties for 2D object filters. ↑ 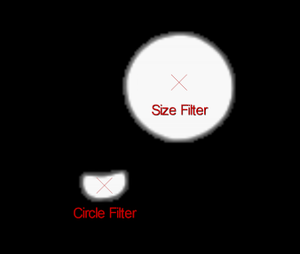 2D reflections filtered by the Size and Roundness (circularity) filter

The size of marker affects visibility. Larger markers stand out in the camera view and can be tracked at longer distances, but they are less suitable for tracking fine movements or small objects. In contrast, smaller markers are beneficial for precise tracking (e.g. facial tracking and micro volume tracking), but have difficulty being tracked at long distances or in restricted settings and are more likely to be occluded during capture. Choose appropriate marker sizes to optimize the tracking for different applications.

Use the Marker Configurator on our website to find markers that suit your needs.

OptiTrack cameras can track any surface covered with retro-reflective material. For best results, markers should be completely spherical with a smooth and clean surface. Hemispherical or flat markers (e.g. retro-reflective tape on a flat surface) can be tracked effectively from straight on, but when viewed from an angle, they will produce a less accurate centroid calculation. Hence, non-spherical markers will have a less trackable range of motion when compared to tracking fully spherical markers. ↑

Active (LED) markers can also be tracked with OptiTrack cameras when properly configured. We recommend using OptiTrack’s Ultra Wide Angle 850nm LEDs for active LED tracking applications. If third-party LEDs are used, their illumination wavelength should be at 850nm for best results. Otherwise, light from the LED will be filtered by the band-pass filter.

If your application requires tracking LEDs outside of the 850nm wavelength, the OptiTrack camera should not be equipped with the 850nm band-pass filter, as it will cut off any illumination above or below the 850nm wavelength. An alternative solution is to use the 700nm short-pass filter (for passing illumination in the visible spectrum) and the 800nm long-pass filter (for passing illumination in the IR spectrum). If the camera is not equipped with the filter, the Filter Switcher add-on is available for purchase at our webstore. There are also other important considerations when incorporating active markers in Motive:

Proper marker placement is vital for quality of motion capture data because each marker on a tracked subject is used as indicators for both position and orientation. When an asset (a rigid body or skeleton) is created in Motive, its unique spatial relationships of the markers are calibrated and recorded. Then, the recorded information is used to recognize the markers in the corresponding asset during the auto-labeling process. For best tracking results, when multiple subjects with a similar shape are involved in the capture, it is necessary to offset their marker placements to introduce the asymmetry and avoid the congruency.

Prepare the markers and attach them on the subject, a rigid body or a person. Minimize extraneous reflections by covering shiny surfaces with non-reflective tapes. Then, securely attach the markers to the subject using enough adhesives suitable for the surface. There are various types of adhesives and marker bases available on our webstore for attaching the marker: Acrylic, Rubber, Skin adhesive, and Velcro. Multiple types of marker bases are also available: carbon fiber filled bases, Velcro bases, and snap-on plastic bases.