This page explains different types of captured data in Motive. Understanding these types is essential in order to fully utilize the data-processing pipelines in Motive.

Motive saves tracking data into a Take file (TAK extension), and when a capture is initially recorded, all of the 2D data, real-time reconstructed 3D data, and solved data are saved onto a Take file. Recorded 3D data can be post-processed further in the Edit mode, and when needed, a new set of 3D data can be re-obtained from saved 2D data by performing the post-processing reconstruction pipelines. From the 3D data, Solved data can be derived from the edit mode only.

2D data is the foundation of motion capture data. It mainly includes multiple 2D frames captured by each camera in a system.

Images in recorded 2D data depends on the image processing mode, or video type, of each camera that was configured at the time of the capture. Cameras that were set to reference modes (raw or MJPEG grayscale images) record reference videos, and cameras that were set to tracking modes (object, precision, segment) record 2D object images which will be used in the reconstruction process. The 2D object images contain information on x and y centroid positions of the captured reflections as well as their corresponding sizes (in pixels) and roundness, as shown below.

Using the 2D object data along with the camera calibration information, 3D data is computed. Extraneous reflections that fails to satisfy the 2D object filter settings (defined in 2D filter settings) are filtered out, and only the remaining reflections are processed. The process of converting 2D centroid locations into 3D coordinates is called Reconstruction, which will be covered in the later section of this page.

Captured 2D data can be reconstructed either in real-time or after the capture. In post-processing, recorded 2D data can be used to create a fresh set of 3D data by Reconstructing the capture again, and the Reconstruction parameters will be reapplied and any existing 3D data will be overwritten. Motive can also live-process (live-reconstruct) incoming 2D images on a frame-to-frame basis and stream the 3D tracking data into external pipelines with extremely low processing latency.

3D data contains 3D coordinates of reconstructed markers, and from this, 3D motion tracking is accomplished. From captured 2D data, 3D markers are reconstructed and displayed in the perspective view and their trajectories can be monitored from the Graph View pane. In recorded 3D data, marker labels can be assigned to reconstructed markers either through the auto-labeling process or by manually assigning it. From these labeled markers, Motive solves position and orientation of rigid bodies and skeletons.

Solved data gets recorded onto a TAK file by default, but it can be reproduced from recorded 3D data in the Edit mode. Solved data stores tracking data of corresponding rigid body assets; specifically, 3D position and orientation data. When Solved data is not recorded or deleted, position and orientation of each asset are calculated in real-time from the recorded 3D data per frame basis. Once the solved data has been obtained, the tracking data of the assets are recorded within the Take and it will no longer be affected by the 3D data. Using solved data can reduce rigid body solve latency, and once it is recorded, 3D data can be deleted to reduce the size of the Take file.

Recorded 2D data, audio data, and reference videos can be deleted from a Take file. To do this, open the Data Management pane, right-click on a recorded Take(s), and click the Delete 2D Data from the context menu. Then, a dialogue window will pop-up, asking which types of data to delete. After removing the data, a backup file will be archived into a separate folder.

Deleting 2D data will significantly reduce the size of the Take file. You may want to delete recorded 2D data when there is already a final version of reconstructed 3D data recorded in a Take and the 2D data is no longer needed. However, be aware that deleting 2D data removes the most fundamental data from the Take file. After 2D data has been deleted, the action cannot be reverted, and without 2D data, 3D data cannot be reconstructed again. 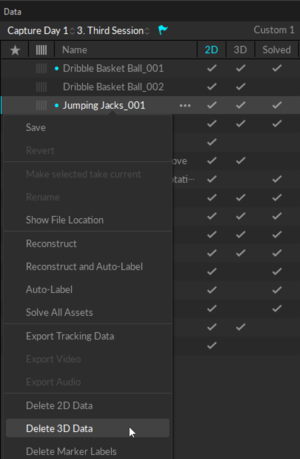 When there is a rigid body tracking data available in a Take, Solved data can be recorded. From the Assets pane, select a rigid body asset(s), select the 'Solve from the context menu to get the solved data. To delete, simply click Remove Solve.

Assigned marker labels can be deleted from the context menu in the Data Management pane. The Delete Marker Labels feature removes all marker labels from the 3D data of selected Takes. All markers will become unlabeled.

Deleting labels for a single Take[edit]

Even when a frame range is selected from the timeline, it will unlabel all markers from all frame ranges of the selected Takes.