In Motive, the Data Streaming pane can be accessed under the View tab or by clicking

icon on the main toolbar.

For explanations on the streaming workflow, read through the Data Streaming page. 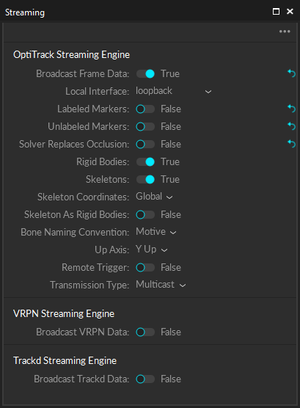 The OptiTrack Streaming Engine allows you to stream tracking data via Motive's free streaming plugins or any custom built NatNet interfaces. To begin streaming, select Broadcast Frame Data. Select which types of data (e.g. markers, rigid bodies, or skeletons) will be streamed, noting that some third party applications will only accept one type of data. Before you begin streaming, ensure that the network type and interface are consistent with the network you will be streaming over and the settings in the client application.

(Default: False) Enables/disables broadcasting, or live-streaming, of the frame data. This must be set to true in order to start the streaming.

(Default: True) Enables/disables streaming of all of the unlabeled Marker data in the frame.

(Default: True) Enables/disables streaming of the markerset markers, which are named collections of all of the labeled markers and their positions (X, Y, Z). In other words, this includes markers that are associated with any of the assets (MarkerSet, Rigid Body, Skeleton). The streamed list also contains a special marker set named all which is a list of labeled markers in all of the assets in aTake. In this data, skeleton and rigid body markers are point cloud solved and model-filled on occluded frames.

(Default: True) Enables/disables streaming of rigid body data, which includes the name of rigid body assets as well as positions and orientations of their pivot points.

(Default: Skeletons) Enables/disables streaming of skeleton tracking data from active skeleton assets. This includes the total number of bones and their positions and orientations in respect to global, or local, coordinate system.

(Default: Global) When set to Global, the tracking data will be represented according to the global coordinate system. When this is set to Local, the streamed tracking data (position and rotation) of each skeletal bone will be relative to its parent bones.

(Default: False) When set to true, skeleton assets are streamed as a series of rigid bodies that represent respective skeleton segments.

Note: The default setting for this has been changed to FBX in Motive 2.0.

[Advanced] (Default: True) When set to true, associated asset name is added as a subject prefix to each marker label in the streamed data.

[Advanced] Enables streaming to Visual3D. Normal streaming configurations may be not compatible with Visual3D, and this feature must be enabled for streaming tracking data to Visual3D.

[Advanced] Applies scaling to all of the streamed position data.

[Advanced] (Default: 1510) Specifies the port to be used for negotiating the connection between the NatNet server and client.

[Advanced] (Default: 1511) Specifies the port to be used for streaming data from the NatNet server to the client(s).

For information on streaming data via the Trackd Streaming Engine, please consult the Trackd documentation or contact Mechdyne. Note that only 6 DOF rigid body data can be streamed via Trackd.

For information on streaming data via the VRPN Streaming Engine, please visit the VRPN knowledge base. Note that only 6 DOF rigid body data can be streamed via VRPN.